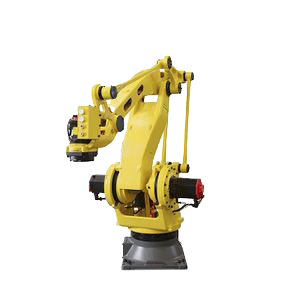 FANUC has long been considered the top robotic manufacturer in the world. They have the largest installation base with over 500,000 robots in use. Their robots have been used to automate the automotive, aerospace, electronics, food, and warehousing industries among many others. With over 100 robot models, they have the most extensive line of industrial robots. FANUC robots are known for being innovative, intelligent, and durable, all characteristics that are key for successfully automating palletizing applications.

FANUC offers a diverse line of palletizing robots, providing customers with options for size, payload capacity, and speed. Their full line of robotic palletizers ranges from collaborative robots to heavy payload options. FANUC’s palletizing robots consist of 4, 5, and 6 axes to accommodate different range of motion requirements. Their palletizing robots are integrated with robotic grippers to allow for the lifting and loading of products. The type of gripper used depends upon the product type, but the most common ones are bag style, vacuum, and parallel grippers. In addition to the gripper, FANUC robots deployed for palletizing tasks may also be integrated with their iRVision system to provide guidance for part and location detection, bar-coding, and operation flexibility. FANUC palletizing robots may also be integrated with other technologies including force sensors, 3D area scanners, and dual check safety. These technologies all enhance the efficiency, accuracy, and safety of palletizing processes.

FANUC’s robots can be used to palletize a number of different product types. Some of the more common ones include cases, boxes, bags, frozen items, cement blocks, bricks, and rolls. Their robots can be programmed to load pallets in single layers, multi-layers, randomized individual order, or mixed product layers.

As mentioned above, FANUC offers a wide range or robots capable of automating palletizing applications. These robots include: