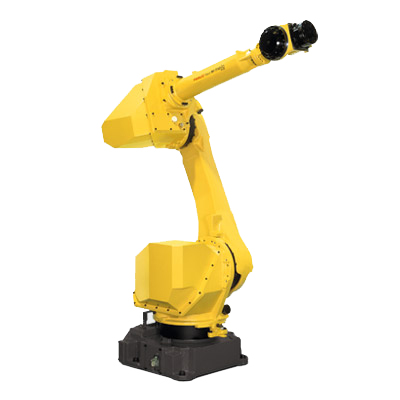 The FANUC M-710iC robot series features a line of speedy, tough, and hardworking robots, making them a popular choice in the industrial world. The M-710iC robots are designed for medium payload applications with ranges between 12 to 70 kg. These FANUC robots are unique to their class since they feature a large work envelope with a small footprint. However, do not let their size fool you, they are some of the toughest robots around with full IP67 protection when integrated with FANUC’s FoundryPro option to be able to withstand some of the harshest work conditions.

FANUC M-710iC series robots provide manufacturers with increased versatility and flexibility within their operations. As mentioned above these industrial robots feature a small footprint while also sporting a slim wrist with reaches capable of up to 3.1 meters. These robots are perfect automation solutions for those facilities with limited floorspace or for applications in confined areas. The slim wrist prevents the robot from interfering with system peripherals to keep operations running seamlessly. They also feature flexibility with different mounting options including ceiling and angles, so no workpiece is ever out of reach for M-710iC robots like the FANUC M710ic/20L. Their expanded work envelope includes the ability for them to reach behind and overhead, along with six degrees of freedom.

What Applications can a FANUC M-710ic perform?

With the FANUC M-710iC series there is a option for everyone with the numerous application capabilities of these robots. The FANUC M-710ic/50 features a rigid arm that when integrated with FANUC’s force sensor technology makes it an ideal candidate for force applications such as automated polishing and robotic deburring. FANUC’s FoundryPro option makes these robots completely IP67 protected meaning they can withstand conditions such as being immersed in up to 1 meter of water for as long as 30 minutes. They are also fully protected against environmental factors such as high dust, allowing models like the FANUC M710ic/70 to complete de-burring, robotic loading, and automated die-casting applications. Other application capabilities include: sealing, automated pick and place, robotic welding, dispensing, packaging, grinding, material handling, assembly, thermal spray, and palletizing. Their multiple attachment points provide flexible EOAT integration no matter the application requirements.

Robots in the M-710iC series eliminate costly downtime and production delays as they provide manufacturers with longer runtimes. The M-710iC robots are composed of fewer mechanical components which allows them to run longer with less risk of failure. RV reducers are used for all robot axes which eliminates belts, chains, and pulleys from these models. There are also no motors in the robot wrist to further reduce the number of parts within the robots. Less mechanical components also help to reduce costs as fewer spare parts are needed for repairs.

FANUC M-710iC robots are some of the most intelligent with capabilities of working with complex 2D and 3D workpieces with FANUC’s robot vision system, iRVision. They also feature built in software for error proofing so manufacturers can be confident applications are completed accurately every time. Their software allows for process specific packages designed for a variety of applications as well as remote connectivity, diagnostics, and monitoring.

What does a FANUC M710ic cost?

The refurbished FANUC M710ic price is typically around $25,000, depending on the payload, reach and controller. Welding packages utilizing the long reach M710ic/20L will typically demand a higher price. The cost of the FANUC M710ic is generally higher than most robots due to its relatively low supply in the secondhand marketplace. Unlike the R2000ib, the M710ic is not used as commonplace by automotive manufacturers so they are not being decommissioned in bulk. Gantry systems utilizing the M710ic will also fetch higher prices.