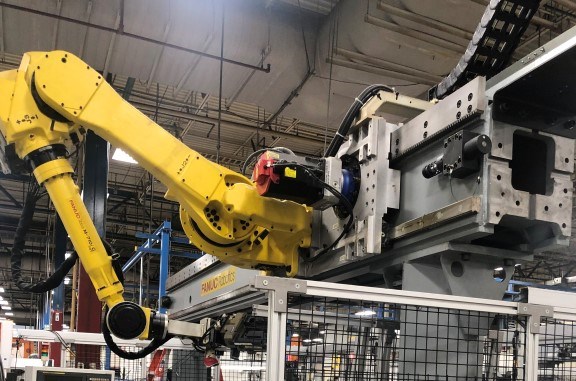 Industrial robots have been automating manufacturing across numerous industries for decades. While the most widely used and perhaps most recognized robot type is the articulated robot, there is another type that is making a name for itself in manufacturing and that is the gantry robot.

Gantry robots have increased in popularity since they can overcome many of the limitations of other robot types. A gantry robot system features a robot manipulator that is mounted overhead onto a linear rail which guides the robot across a horizontal plane. Because of this configuration they can be referred to as linear robots and are similar to cartesian robots. They operate in three axes, X, Y, and Z and may also have a theta axis to support end-of-arm-tooling. They feature a rectangular or cubic work envelope due to their rail system which allows these robots to cover a larger area of space. Gantry robots are ideal for pick and place and part loading and unloading applications, but they are capable of others. These include dispensing, assembly, material handling, palletizing, packaging, and cutting. Applications with minimal part orientation requirements or with workpieces that are staged beforehand are best suited for automation with gantry robots. The FANUC M-710ic/70 and the FANUC M-20ia are two of the most common gantry robot models used in manufacturing.

Gantry robots and cartesian robots are similar to each other with the main difference being that gantry robot systems feature two X axes instead of a single X axis like cartesian robots. This extra X axis allows for larger load capacities and is why they are commonly deployed for automated pick and place. The additional X axis also allows for longer stroke lengths and higher operating speeds. Both X axes run parallel to each other, however, only one axis is powered by a motor to prevent binding. A torque tube may be used to transfer the driving power of one axis to the other or the second axis may be completely idle and instead act as a guide to support the workload. Deciding how to operate the second axis mainly depends on the configuration of the gantry system and the operation speed. Powering only one X axis keeps costs down and simplifies the system.

The versatility of gantry robots makes them highly desirable to manufacturers. The are also a very cost effective automation option. While gantry robots are typically mounted overhead, they may also be configured to operate below workpieces, making them advantageous for those needing to work underneath parts. This is just one of the many benefits to robots with tracks. In addition, most gantry robot systems are quite large, but they can also be suitable for smaller, desktop size machines. Gantry robots are very useful in both welding automation and robotic assembly They allow for higher payload capacities for their size and are easily adaptable. The six axis Motoman HP20 can easily be changed or upgraded with little reconfiguration, making it ideal for those with frequently changing product lines. In addition, they can be easily modified to meet special work environment conditions such as noise control or hazards. A FANUC M-710ic can handle damp or dirty workspaces with the right configuration and components.

Looking to purchase or sell a gantry robot? Contact us at mm@robotsdoneright.com