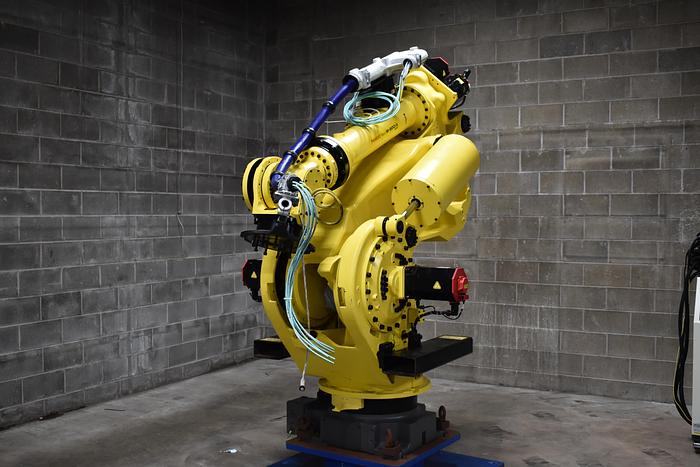 Payload is one of the key defining characteristics of an industrial robot. It measures the maximum load capacity that a robotic wrist can support. Robotic payload not only refers to the weight of workpieces a robot can handle, but also the weight of any end-effectors integrated with a robot. When selecting an industrial robot, it is important to consider the maximum payload needed as it will likely determine what applications and workpieces a robot can handle. If an industrial robot’s payload is too light, the robot or workpieces could become damaged and the application may fail. While too heavy of a payload can hamper a robot’s operation.

Some of the top robotic manufacturers in the world have built super high payload robots. Robots from FANUC’s M-2000iA series are considered some of the strongest in the world with payloads from 900 kg to over 2,000 kg. The FANUC M-900ia/600 is one of the heavy lifting robots from the series. ABB is another manufacturer that has designed several high payload robots, including the ABB IRB 6640.

Most high payload robots are larger in size for the ability to handle heavy workloads, but this is not necessarily always the case. FANUC’s R-2000i series is one of their most successful since they were one of the first to feature a slimmer profile and footprint without sacrificing payload. Manufacturers with limited floorspace were able to automate heavy lifting applications with robots from the R-2000i series. The FANUC R-2000ia/165F was the original R-2000i robot and since its inception three additional generations have been developed with each featuring an improvement to the robotic footprint. The latest generation, the R-2000iD series, features a footprint that has been reduced by 23% from the previous R-2000i line. The FANUC R-2000ib/210F from the series features a payload of 210 kg, making it ideal for those needing a heavy payload, but do not have much floorspace to spare.

Looking to purchase or sell a heavy payload robot? Contact us at mm@robotsdoneright.com