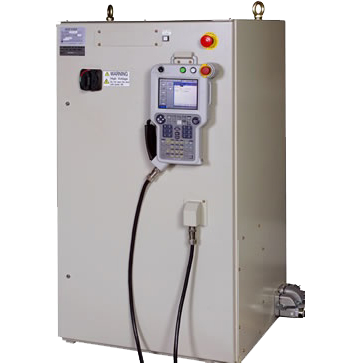 The Yaskawa Motoman NX100 controller is an industrial robot controller that includes built in Ethernet, a full color touch screen display, and the Windows CE operating system. This controller was produced anywhere from 2005 to 2009. Used Motoman NX100 robots are a great option to automate an application as most models have a significant useful life left. The Yaskawa NX100 is capable of controlling up to 4 robots using a single teach pendant, lowering the cost of multiple robot systems like the Arcworld 6300. The NX100 controller features Advanced Robotic Motion which provides increased vibration control. Not only can the NX-100 control multiple robots, but it can also control up to 36 Motoman motor based axes at one time. Used Motoman NX100 robots can provide a significant return as they are built to last while costing significantly less than new or used Motoman robots.