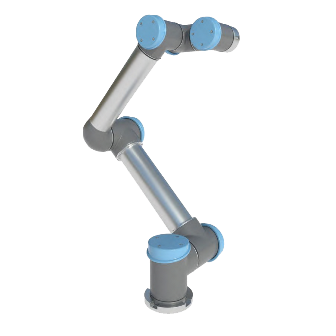 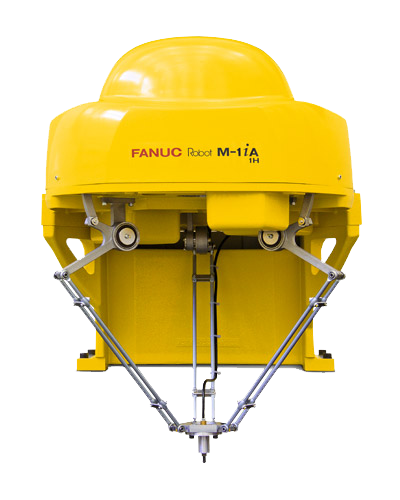 The design of collaborative robots resembles articulated robots with a single robotic manipulator attached to a base. Cobots feature a more rounded structure along with the elimination of pinch points for safety purposes. Cobots are built with force sensors throughout their robotic arm, allowing them to detect abnormal force. These special safety features make cobots safe for direct human interaction. The FANUC CR-15iacan work right alongside a worker with no barriers. Its sensors are able to detect when an object or person is near so the cobot will slow down or stop completely. Its rounded design ensures that in the off-chance a collision occurs contact will be gentle.

Delta robots are designed for speed and are sometimes referred to as spider robots since their design resembles a spider. They feature three to four slim robotic arms that extend downward from the base and are connected by the EOAT. The motor is stored above the arms in the base, allowing for incredibly fast speeds and nimble movements. Delta robots, like other traditional six axis robots must be kept separate from workers while in operation. The FANUC M-2ia is one of the most popular delta robots.

Both cobots and delta robots are considered low payload robots. Collaborative robots typically feature a payload capacity under 20 kg. FANUC’s CR-35ia is currently the strongest collaborative robot with a maximum payload of 35 kg.

Since delta robots are designed for speed their payload capacities are lighter. Delta robot payloads range from ultra-light at 0.5 kg to maxing out at around 12 kg.

Collaborative robots range quite a bit for their reach capabilities. For those with compact work envelopes there are many options around 500 mm. The Universal UR3 is a cobot with a short reach. There are also many collaborative robots with reaches over 1,000 mm. FANUC’s CR series goes up to 1,800 mm.

Delta robots are more limited by their reach capabilities. They range from around 300 mm to just over 1,000 mm making them only suitable for compact work areas.

Many collaborative robots feature the unique programming method of hand guidance. The Universal UR10 can be programmed by manually guiding its arm through the waypoints of an application. The UR10 is able to store this information and recall it to repeat the program on its own, significantly simplifying the robot teaching process. Cobots may also be programmed through tablets, although hand guidance is the preferred method.

Delta robots feature more traditional programming methods than cobots. The most common method of programming is through teach pendants. The FANUC M-3ia can be programmed with a pendant for automated pick and place applications. Offline programming is another option, especially for more complex processes.