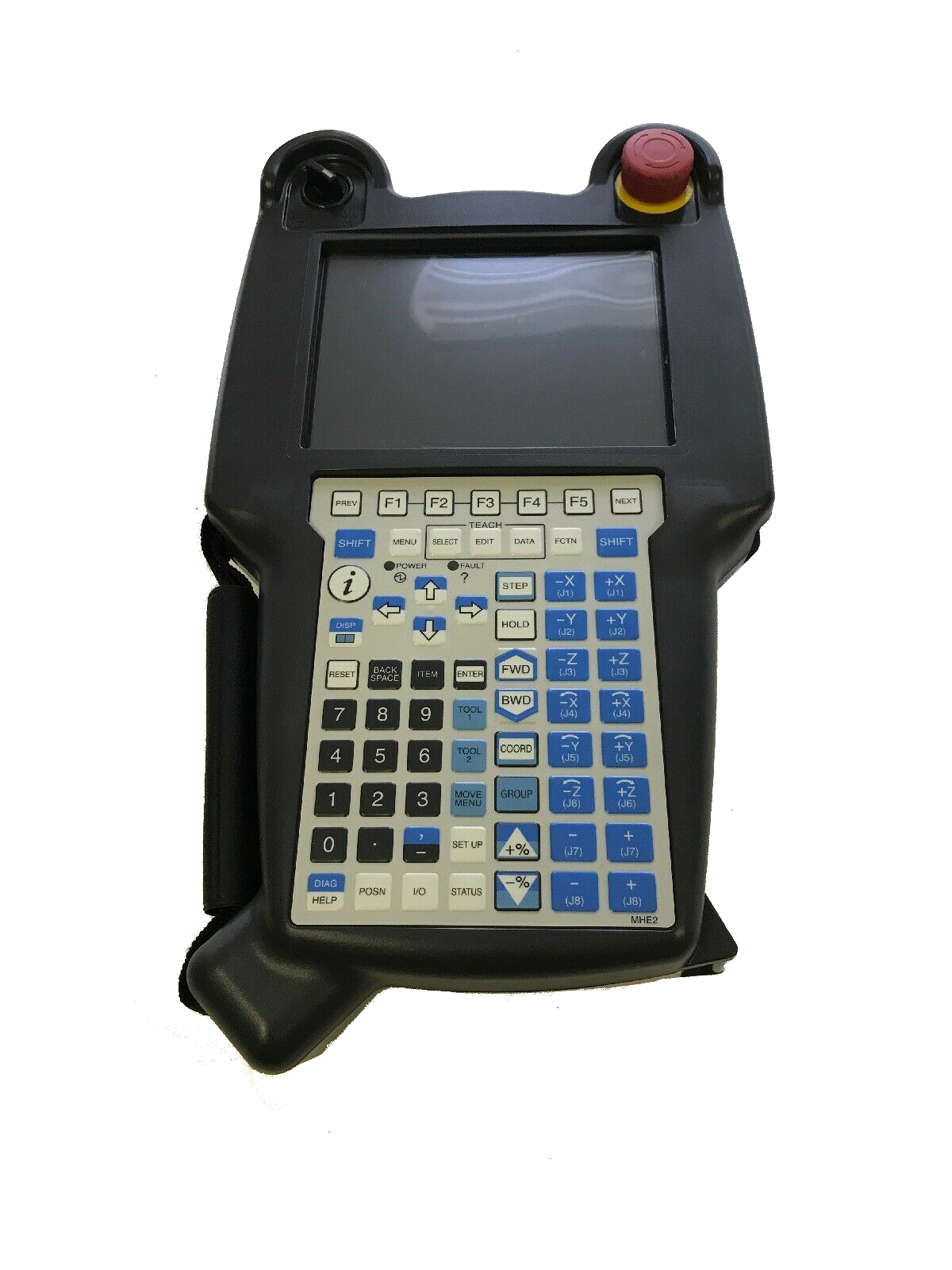 What are Robotic Teach Pendants?

Industrial robots are sophisticated machines capable of handling numerous manufacturing processes, even ones once thought only possible through human labor. In order for a robot to be capable of performing an application it first must be programmed. Robotic teach pendants are the most common device use to program industrial robots. Teach pendants are a vital component of a robotic system. Without a teach pendant a FANUC R-2000ib/165F would not be able to weld car frames, while the FANUC LR Mate 200id could not assemble computer keyboards, as they would lack information needed to complete each process.

Robotic teach pendants are handheld devices that may be wired or wireless. Pendants are typically included with the control system when purchasing an industrial robot. They may contain several buttons or switches or feature a touchscreen display as is the case with newer models. They also feature a display which shows the robot’s commands and allows for editing of those commands. In addition, the display can be used to recall the command history of the robot. Pendants utilize a keyboard for task input and easy programming. Another common feature of pendants is a large red button, which is the emergency stop button of the robotic system. It can be utilized should the industrial robot malfunction and will immediately stop operation once activated, ensuring the safety of any workers or manufacturing equipment around the robot.

Robotic teach pendants provide a robot operator the ability to program applications and to control the robot’s motion remotely. Operators can program robots through pendants without needing to be connected to a fixed terminal. The remote capability allows operators to program or control robots safely out of reach of their workspace or hazardous environments. In addition to programming and controlling robots, pendants can be used for testing and troubleshooting robotic systems. The ability to test robot systems allows for easier integration. While troubleshooting is simplified by being able to recall the robot’s command history and functions to quickly identify an issue.

Industrial robots are best suited for performing repetitive tasks, making teach pendants ideal programming solutions as they are designed for teach and repeat programming. Through this technique operators program robots for specific application parameters, these may include the robot speed and range of motion. The controls on the pendant allow an operator to relay information to the robot about cycle times, velocity, functionality, and interactions needed with any additional machinery involved. For example, a teach pendant can be utilized to program a FANUC M-710ic/50 for a die-casting application. The pendant will relay information about each step needed in the application process including loading the die-cast machine with the mold, injecting the mold, and then removing the cast from the machine and mold once cooled. The use of a robot pendant allows the operator to safely program the application remotely, being spared of the harsh foundry environment. Teach pendants also simplify programming of a multi-step manufacturing process through inputting information with their keyboard instead of manually manipulating the robot or coding through a computer.

Looking for buy teach pendants? Click on the below brands to explore the models