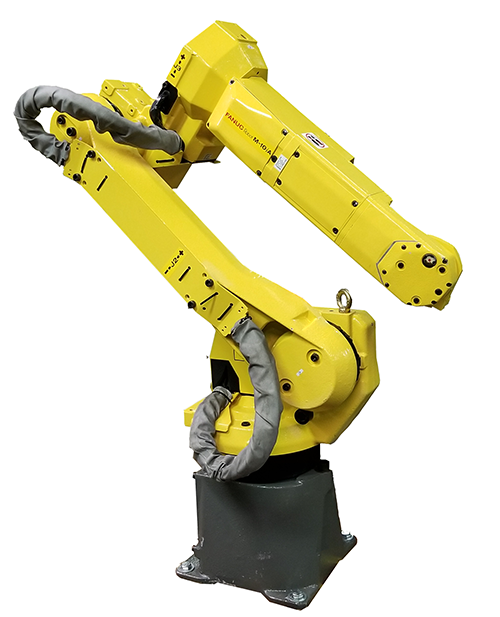 FANUC is known as the top robotic manufacturer in the world. They have held the top spot for many years with their long-lasting robotic systems and innovative technology that continues to drive robotic advancements. It’s not just their robots that have evolved over the years, but also their robot controllers. Each controller model is faster, more accurate, and user friendly than its predecessor. Below is an overview of FANUC controllers and their features.

The FANUC R-J3 controller is an older model but can still be found in the second-hand market as a great cost-effective alternative to new models. The R-J3 pairs with a number of FANUC robots including the S-430iw and the M-6i. It is designed with three cabinet styles: A-cabinet, B-cabinet, and Mate cabinet. It features a CPU dual processor for fast programming and increased application accuracy. It is integrated with FANUC’s AccuPath software for advanced tracking as well as collision detection. Application cycle times can be reduced with the R-J3 controller with FANUC’s TurboMove software.

The FANUC R-J3iB controller is the successor to the R-J3 controller. While this controller has not been in production since 2006, it is still quite popular in the robot market since many robot models paired with it are still in use. The R-J3iB makes programming easier with plug-in options for application specific software and an operator panel with intuitive buttons. For those with limited floorspace, the R-J3iB controller is available in the compact Mate cabinet style, while A and B cabinet styles are also available. The FANUC R-J3iB controller optimizes robot performance and can control up to 16 axes. Robots such as the FANUC Arcmate 120ib or the R-2000ia are examples of ones typically paired with the R-J3iB.

FANUC improved upon motion and application performances from the R-J3iB controller with the its R-30iA controls. Though originally called the R-J3iC controller, the R-30iA features a lightweight and compact design. 2D and 3D vision systems, vibration control for acceleration and deceleration, and collision detection are all available with this controller. The R-30iA simplifies the integration process with the capability to download robot programs to a server. Position memory software safeguards against power failures as the R-30iA stores its last position to be able to resume operation immediately with power restoration. The FANUC Arc Mate 100ic or the R-2000ib can be paired with R-30iA controls.

The FANUC R-30iB controller is one of FANUC’s newer controller lines. It is available in multiple styles including A-cabinet, B-cabinet, Open-Air cabinet, Paint Mate cabinet, and Mate cabinet. Featuring motion control, iRVision, and 3D graphic manipulation, it is much more advanced than previous controller models. The R-30iB is also more compact and energy efficient. The iPendant of the R-30iB is built with touch screen technology for process information and process path displays for easier integration. Force sensing, collision detection, servo monitoring, and dual check safety software all come standard with R-30iB controls.

The FANUC R-30iB Plus controller is the latest generation in robot controls. Available in five cabinet styles including A-cabinet, B-cabinet, Mate cabinet, Open-Air cabinet, and Compact cabinet. It is FANUC’s most user friendly and energy efficient controller yet. With more than 250 software functions, the R-30iB+ optimizes speed, cycle time, precision, and safety. Standard software includes vision, force, and interface check.