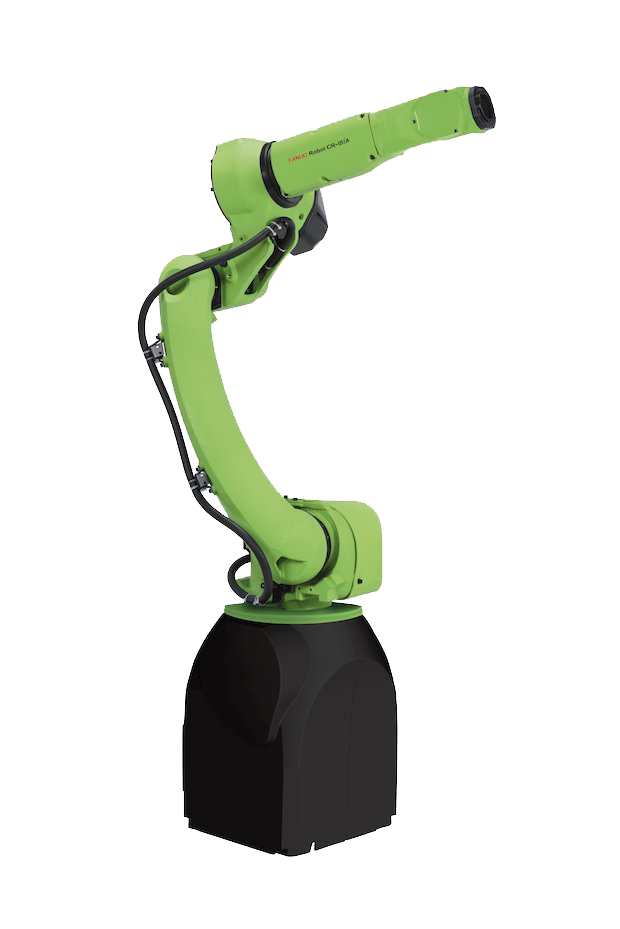 Industrial robots have been automating manufacturing for decades, but the development of collaborative robots has given them some competition. Below is a look at some of the key differences between robots and cobots.

Collaborative robots are specially designed to be able to work alongside humans without the need for safety fencing. Because they work in close proximity to people, the cobot design is less rigid than industrial robots. They feature unique rounded designs to protect workers in the off chance of collision. All their wires and motors are internalized, and pinch points are eliminated. FANUC Robotics took safety features a step further with their CR-7ia, that features a green foam exterior coating, enhancing collision protection.

Industrial robot designs can vary depending upon the type. The most common robot is the articulated robot that features a single robotic arm with 4 to 6 axes and a heavy cast frame. Robotic arms mimic human arms with shoulder, elbow, and wrist like parts. Unlike cobots, robots do not feature rounded edges and are not suitable for operation around humans without safety barriers. The FANUC R-2000ib/210F is one of the most common industrial robots.

Industrial robots tend to cost less upfront than collaborative robots. However, with the expansion of robotic technology and the second-hand robot market, Cobots are becoming more affordable. In addition, robots can complete manufacturing processes on their own, helping to reduce labor costs. Their autonomy combined with their efficiency can help to reduce the overall costs of manufacturing, making them a more affordable investment in the long run. The lower upfront costs of regular industrial robots can make automation more accessible for smaller businesses.

One of the biggest advantages of collaborative robots is their ease of programming. Many cobots can simply be programmed by hand, in which an operator guides the robot arm manually through the desired program path and tasks. It is then able to repeat the exact process repeatedly.

Industrial robot programming in the past was complex, however, today’s robots are easier to program with many user-friendly software options. There are a few different programming methods for industrial robots but using a teach pendant is by far the most common.

As mentioned above, collaborative robots are constructed for the safe interaction with workers. In addition to their exterior they also have internal safety features. All cobots have force sensor technology to be able to detect any abnormal force applied to the arm. They will slow down or completely halt operation if such force is detected. In addition, many have speed monitoring to adjust automatically if a worker is present or not.

Robots do not have the same safety features as cobots and require safety fencing to enclose their operation from workers. Safety barriers allow a FANUC Lr Mate 200id to operate at its full speed while protecting workers. These barriers have sensors to stop robot operation should a person enter the work area.

Cobots are capable of performing many of the same applications as robots. The main differences are cobots generally can only handle light payloads and are designed to assist workers. Some of the most common cobot applications include pick and place, machine tending, packaging, and dispensing.