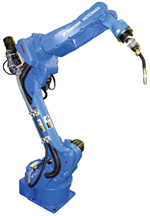 Ultrasonic cutting is a new technology that is starting to break into the robotic world, replacing traditional robotic cutting applications such as laser and waterjet cutting. Ultrasonic cutting robots are integrated with cutting instruments that use ultrasonic energy to separate a workpiece. During this process microscopic vibrations are created in the blade from an electric pulse that is sent through the cutter. These vibrations are so microscopic that they cannot be felt or seen. A powerful force of energy is created from the vibrations allowing the blade to easily cut through the workpiece with very little pressure applied. The clean, precise cuts made by this process is causing manufacturing to begin replacing their traditional cutting robots with ultrasonic cutting ones such as the FANUC Arcmate 120ic.

Why Use Ultrasonic Cutting Robots?

Even though robotic ultrasonic cutting is a new technology, it is quickly gaining popularity among many industries due to the number of benefits provided. These benefits include:


Contact us by email mm@robotsdoneright.com or phone (440) 724-6568 today to discuss buying or selling a ultrasonic cutting robot.