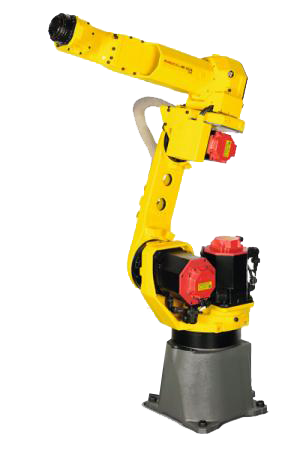 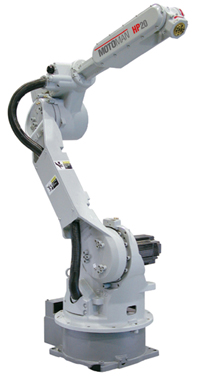 Recent advancements in robotic technology has led to the automation of several complex manufacturing processes, including waterjet cutting. Though it was once deemed challenging to automate waterjet cutting, that is no longer the case and industrial robots have turned this application into a safe, clean, and precise material removal process.

Six axis robots, such as the FANUC M-20ia, are integrated with end of arm tooling (EOAT) to create an ultra-high pressure jet of water, reaching up to 60,000 pounds per square inch. The robot arm then guides the high pressure waterjet to the workpiece in order to wear the material away, creating a cut and separating the workpiece material. Robotic waterjet applications can use plain water to cut materials such as plastics, textiles, and composites. While hard materials such as steel, aluminum, and stone require the addition of an abrasive, usually crushed garnet, to be mixed into the jet stream in order to be cut.

Manufacturers favor waterjet cutting robots because no matter the material, cuts always turn out clean and even. With robotic waterjet cutting there is no heat affected zone (HAV). Workpieces are kept in pristine condition without defects or distortion from the cutting process. In addition, there is no dust or smoke produced from the waterjet and the use of chemical solvents are avoided, making for a much cleaner work environment. Waterjet robots may help eliminate the need for additional finishing applications, like grinding, due to their increased accuracy along with the clean edges produced from cutting with high pressure water. This helps prevent material waste along with reducing manufacturing costs.

Robots like the ABB 2400, are able to significantly increase the productivity of waterjet applications with their cutting speed. They are capable of cutting between 3 to 40 inches of materials per minute depending on the material type and thickness. Throughput can be further increased with the ability to have multiple waterjet robots work side by side on multiple parts. One pump can be setup to feed several robots working simultaneously. They can also have built in shape generation software, allowing them to easily be programmed to cut multiple shapes on demand including 3D parts. Robots can seamlessly switch from one part to the next with little downtime. With increased productivity from waterjet robots, manufacturers will see their cycle time greatly reduced.

The long reach of waterjet robots, such as the Motoman MH24, provides greater flexibility allowing them to complete cuts above, below, and in between parts. They can be mounted to a wall, inverted, or mounted to a seventh axis rail to carry them along a large work envelope. They are designed to handle a variety of parts regardless of size and are ideal for high volume productions.

Waterjet applications can be hazardous to workers which is why robots are typically enclosed within a work cell. Workers should not be within the cutting zone when waterjet robots are in operation. High noise levels along with the extreme pressure from the jet make it unsafe. Work cells can be integrated with a number of safety features including guarding, scanners, and light curtains to prevent harm to workers during waterjet applications.

Contact us by email mm@robotsdoneright.com or phone (440) 724-6568 today to discuss buying or selling a waterjet cutting robot.