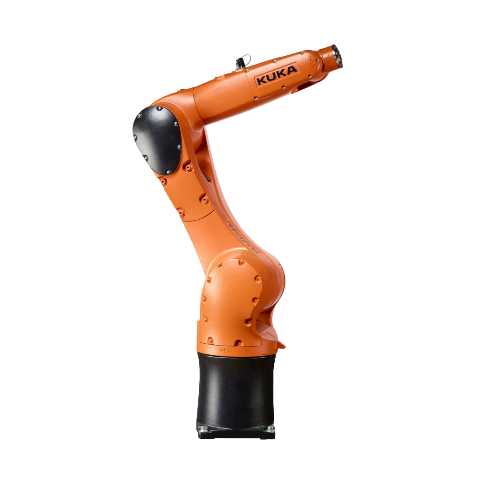 One of the most important factors to consider when selecting an industrial robot is the maximum payload of the robot. However, when multiple robots feature the same payload it can make it difficult to choose an industrial robot arm, especially when they are manufactured by two of the top robotic brands, Yaskawa Motoman and KUKA. The Yaskawa Motoman MH6 and the KUKA KR 6 are two multipurpose low payload robots. While both these robot manipulators feature a maximum payload capacity of 6 kg they do have have some subtle differences. While their differences may not be major they can mean the difference on which industrial robot will be right for your application. Below is a comparison of the Yaskawa Motoman MH6 and the KUKA KR6.

The MH6 is part of Yaskawa Motoman’s material handling robot line. The MH6 is one of the lighter material handling robots of the series. It features a slim robotic manipulator body and light mass of 130 kg, allowing it to be easily integrated on production floors as it requires minimal space. It has a reach of 1,411 mm and a repeatability of +/- 0.08 mm. The Yaskawa Motoman MH6 is extremely accurate while also providing high operation speeds. It’s high repeatability ensures that even while operating at fast speeds accuracy will not be compromised.

The Yaskawa Motoman MH6 offers floor, overhead, and wall mounting options. Its mounting options in addition to its compact footprint make it ideal for those looking to automate but are limited on space.

The MH6 is primarily used as a material handling robot, but it can also automate other applications. These include assembly, machine tending, packaging, dispensing, injection molding, arc welding, and material removal applications.

Yaskawa Motoman has also designed two variants to the MH6, a higher payload variation and a short-arm variation. The MH6-10 is the higher payload option for the MH6. The MH6 can be paired with the DX100 or DX200 controllers.

The KUKA KR6 is another low payload material handling robot. While it shares the same payload as the Yaskawa Motoman MH6, it does have a longer reach of 1,611 mm. This allows the KR6 to handle larger workpieces and cover bigger work areas than the MH6. The KUKA KR6 also features a compact footprint, but its robot mass is heavier than the MH6, weighing 235 kg. Like the MH6 is can be installed multiple ways with floor, overhead, and wall mounting. However, with its heavier mass it may be more difficult to install overhead or at an angle than the MH6.

Unlike the MH6, the KUKA KR6 does not feature additional variations. The KR6 can be paired with either the KRC2 or KRC4 controllers.