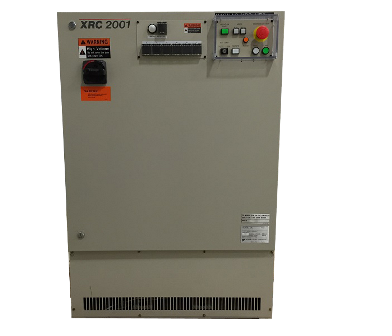 The Yaskawa Motoman XRC 2001 controller is an industrial robot controller that includes easy to use software and a Windows supported teach pendant This controller was produced anywhere from 1999 to 2004. The XRC 2001 controller was replaced by the Motoman NX100 controller. Used Motoman XRC robotsrepresent a very economical option to automating an application. In 2001, the XRC controller was upgraded to reflect the safety standards at that time, which includes a dual-channel emergency stop. The Yaskawa XRC is capable of controlling up to 4 robots using a single teach pendant, lowering the cost of multiple robot systems like the Arcworld 6200. Used Motoman XRC robots can provide a significant return as they are built to last while costing significantly less than new or used Motoman robots.