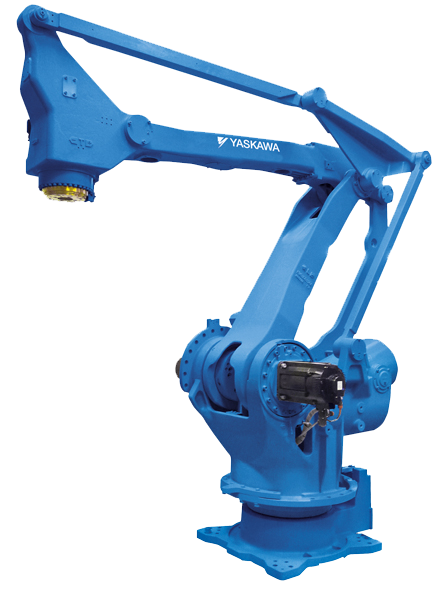 The MPL300 is part of Yaskawa Motoman’s “Master Palletizing” robot series. The Yaskawa Motoman MPL300 is designed with four axes for robotic palletizing applications. Its fast axial speeds and high acceleration will boost productivity rates and cut down on cycle times. The mpl300 is capable of servicing multiple infeed conveyors and up to four pallet build locations.

Featuring an extensive vertical reach of 3,024 mm, the MPL.300 is capable of palletizing workloads up to 108 inches tall. This four-axis robot also provides heavy lifting power with a payload capacity of 300 kg. This industrial robot is similar in payload and reach to the FANUC M-410ib/300.

Maintenance is reduced with the through-arm cable configuration of the Yaskawa Motoman MPL-300. Both air lines and cables are internalized through the robot base to its EOAT. This prevents cable interference when the MPL 300 is operating as well as reduces cable wear. Reliability is maximized as disruptions to operation are decreased. The hollow wrist design not only extends cable life of this articulated robot but also allows for a wide range of wrist motion.

Looking to sell a used Motoman robot similar to this model? Click Here: Sell a robot